The winners of the first Create a Test Awards were announced this morning in arguably the most prestigious twitter-based maths/science assessment related awards ceremony of the day. It was our chance to celebrate our most prolific users as well as some of our personal highlights of 2016. For those of you who don’t follow @createatest (we forgive you) here is the full list of winners.

Most questions contributed
While we may not actually be able to prove it, we’re pretty sure that you can’t have a test without questions. In 2016 the school that created the most of them was Thomas Deacon Academy, with an impressive total of 258. To give you an idea of just how many that is, our second placed school—Wellington School—created (a still hefty) 113. 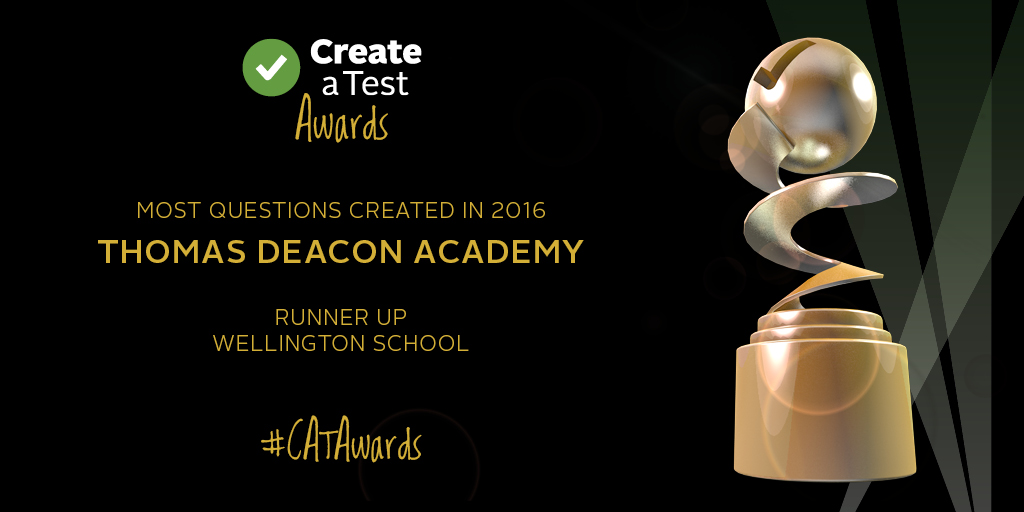 Most papers created
As the more astute amongst you will have deduced from our name, Create a Test is largely about creating tests. The school who did that more than any other this year was Cambian Pottersbury Lodge School, who created a grand total of 94 papers. In second place was Guilsborough Academy with 83. We’re hoping that this year someone can break the 3 digits barrier. Could it be you? 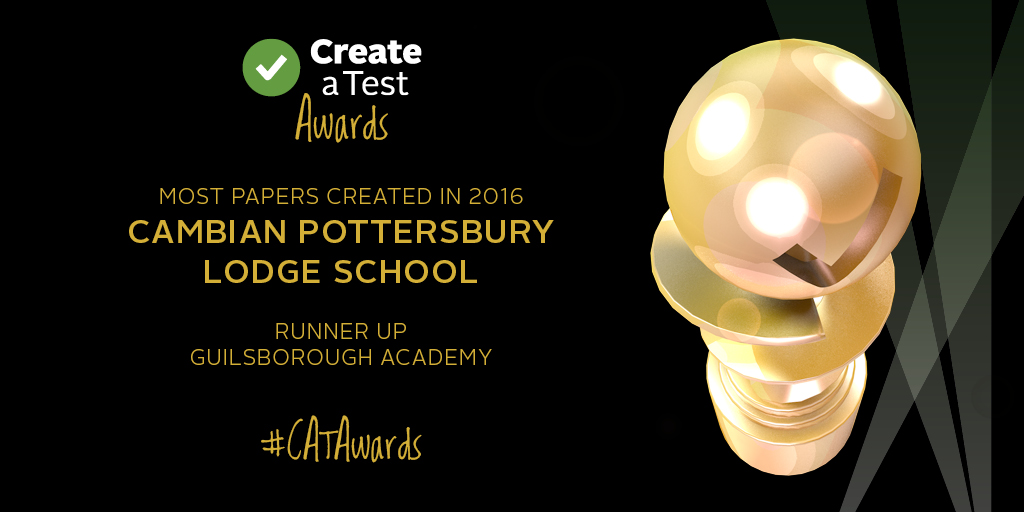 Most questions marked
Of all the awards, we imagine this is one every teacher would like to win. The honour of having cold hard statistics to back up their commitment to the cause next time some idiot says “You teachers have it easy, you’re always on holiday” goes to the staff of St Mary’s who marked a staggering total of 4,828 questions in 2016. To prove that’s no anomaly, our second placed school—Queen Elizabeth's Academy—marked a handful less at 4,488. If we had medals to give, you guys would be dripping in them. 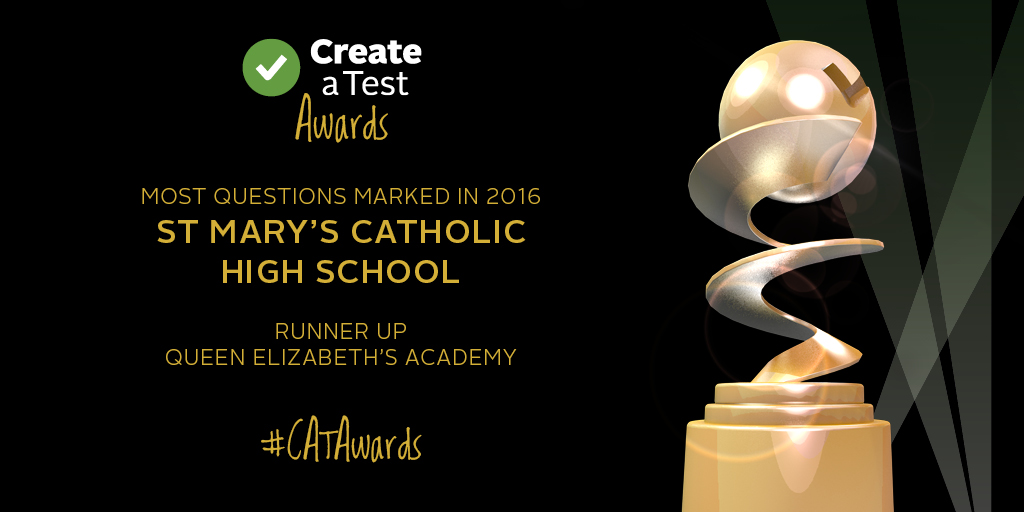 Most log ins
It will doubtlessly come as massive shock to you to learn that we, the Create a Test team, don’t get out much. One of our favourite pastimes is checking the sign in logs to see who’s visiting the site at any given time. It makes us feel popular. The most familiar face in 2016 were Wolstanton, who popped by 210 times. Our second most frequent visitors were Woodkirk with 129 visits. 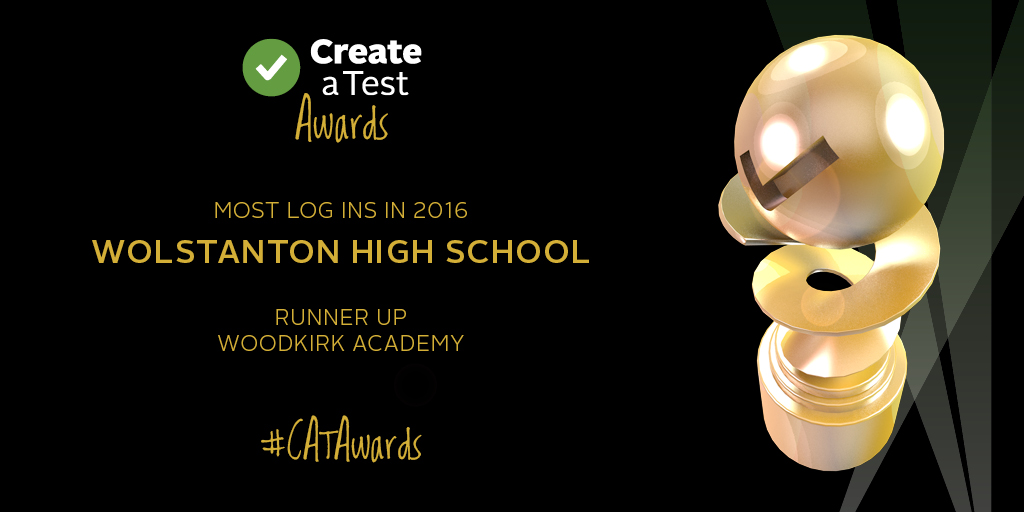 Twitter account of the year
The winner of this one was the subject of fierce debate. In the absence of statistics and data upon which to base our decision, we had to activate the other, alien parts of our brains associated with feelings and emotions. Eventually we were able to agree that we all liked the problems posted by Ed Southall via @solvemymaths because they caused us to experience enjoyment. We’d recommend that you follow Ed if you are also fond of Maths and enjoyment. 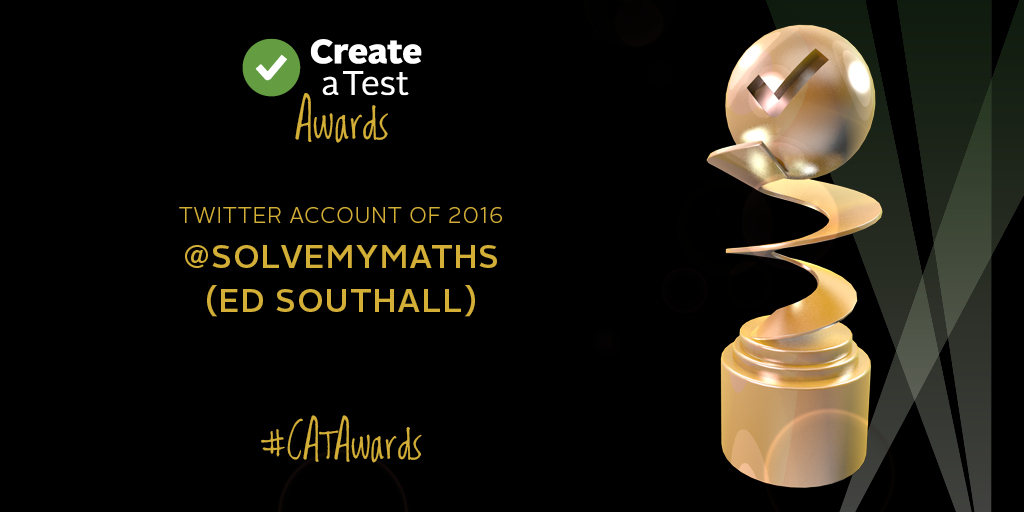 Thing of the Year
OK, you got us. We basically made up this award so that we could give it to the Mathematics Gallery at London Science Museum. Seriously though, it might be the coolest thing, not just of 2016, but ever. We love that they eschewed the usual combination of bricks and mortar, instead opting to construct the entire space out of pure awesome. https://beta.sciencemuseum.org.uk/mathematics 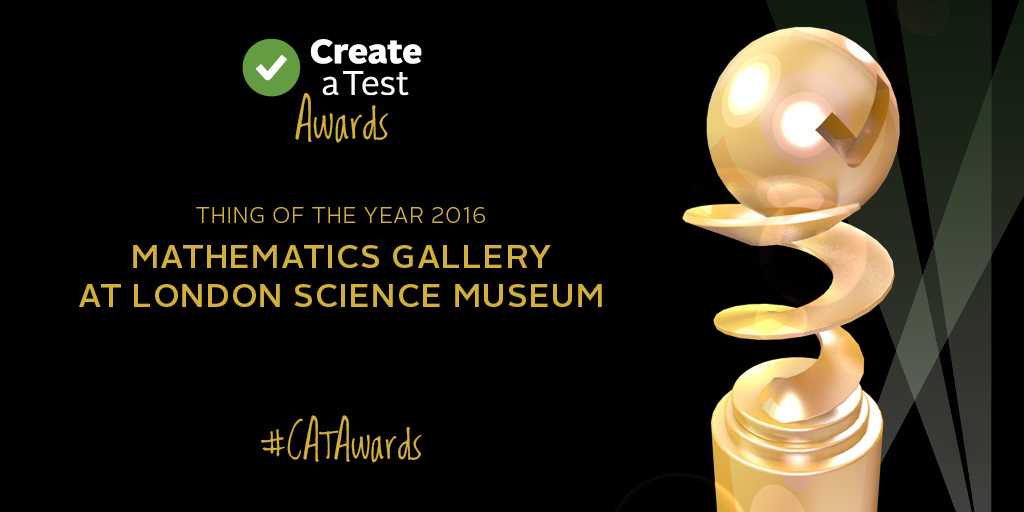 Did you win? Do you wish you won? Did you enjoy this? Hate this? Are you human? Have thoughts? Want to share them? If you’ve anything to say, even if it’s just that you actually bothered to read this far, you can get in touch by email info@createatest.co.uk or via twitter @createatest. We’d love to hear from you.